Brazil's Pantanal wetland which is world's largest tropical wetland is in news because of forest fire. It is unfortunate that the kidney of the Nature i.e. wetlands are facing man made problems . Humans have cut down nearly 20% of the Amazon in the last 50 years, according to the World Wildlife Fund (WWF). If another 20% of the Amazon disappears, that could trigger a "dieback" scenario in which the forest would dry out and become a savannah. That process would release billions of tons of carbon dioxide into the atmosphere and raise global temperatures. 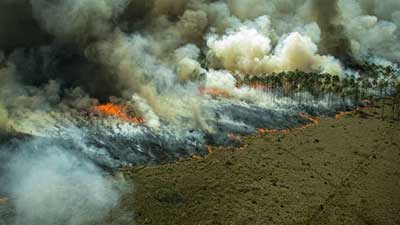 The Pantanal derives its name from the Portuguese word for 'swamp'. The Pantanal wetlands, situated in west-central Brazil, sprawls over more than 1,50,000 sq km and also extends into Bolivia and Paraguay. 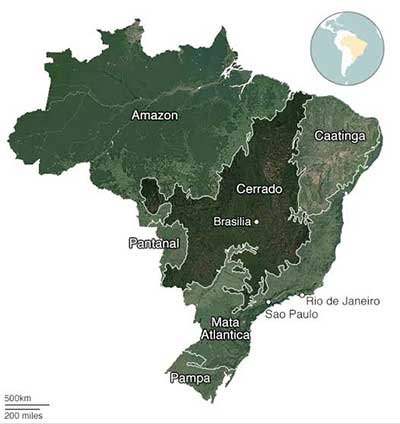 Fires in Brazil’s Amazon increased 13% in the first nine months of the year compared with a year ago, as the rainforest region experiences its worst rash of blazes in a decade.

On January 22, 2020, during a meeting of the Council of Government, Brazilian President Jair Bolsonaro announced the creation of the Amazon Council and an Environmental Task Force to devise plans and actions for protecting, defending, and sustainably developing Brazilian forestry. Bolsonaro explained that the Council would be coordinated by Vice President Hamilton Mourão, who would organize the various actions of each ministry in this regard. 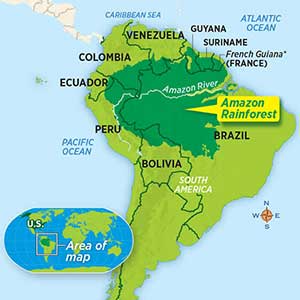 Brazilian administration has clarified that the Council would listen to representatives of civil society, including academia, to build public policies that can, in addition to guaranteeing environmental preservation, offer sustainable development alternatives for the Amazon, which is home to 25 million people.

Brazil has planned even moving towards transfer of deforestation and fire monitoring to military.